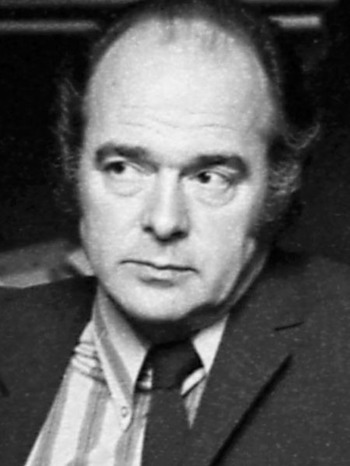 Barry Leopold Letts (26 March 1925 – 9 October 2009) was a British television director and producer, best known for producing Doctor Who for five seasons from 1970 to 1974. His tenure coincided almost perfectly with that of Jon Pertwee as the Third Doctornote Letts produced all Pertwee's stories except his first, and stayed as producer for one more story after Pertwee's departure and the script editor for his entire tenure was Terrance Dicks, with whom Letts formed a lifelong friendship. Letts and Dicks also created the sci-fi drama Moonbase 3 after leaving Doctor Who.
Advertisement:

Letts first work on Doctor Who was as director of the Patrick Troughton serial "The Enemy of the World", and he would direct four serials during his tenure as producer: "Inferno"note The studio scenes for Episodes 3-7 only, after original director Douglas Camfield was taken ill, "Terror Of The Autons", "Carnival Of Monsters" and "Planet Of The Spiders". After leaving as producer, Letts returned to direct the Fourth Doctor Serial "The Android Invasion".

Taking over as producer from "Doctor Who and the Silurians", Pertwee's second story as the Doctor, Letts inherited from his predecessor Derrick Sherwin a major change to show's format in which the Doctor was stranded on Earth, exiled by the Time Lords. Although neither Letts nor Dicks was a major fan of this limitation to the show's storytelling possibilities, they largely stuck to it for their first two seasons, before beginning to experiment with returning to space with their third, and completely lifting the exile with their fourth.

Letts also co-wrote four serials during his tenure as producer with his friend Robert Sloman: "The Dæmons", "The Time Monster", "The Green Death" and "Planet Of The Spiders". BBC regulations precluded Letts from being credited as writer, since he was already credited as producer, so "The Dæmons" was credited to the pseudonym "Guy Leopold" and the remaining three gave sole credit to Sloman.

Letts departed as producer, along with Dicks and Pertwee after five seasons in the post, to be succeeded by Philip Hinchcliffe; at the time, he was the longest-serving producer in the show's history. One of Letts' final acts before departing was to cast a little-known, out of work actor called Tom Baker in the role of the Fourth Doctor. It would prove an inspired choice, and it would be seven years and three producers later before another new Doctor needed to be cast. For the last of those years, Letts briefly returned to the show as an executive producer to mentor the last of those producers, John Nathan-Turner, who'd stay in the position all the way until the end of the show's initial run in 1989, surpassing Letts as its longest-tenured producer.

Letts would maintain a close relationship with Doctor Who even after its cancellation and 2005 revival, writing radio plays and novelizations during the '90s and 2000s. He would also be a regular face at conventions and other public events and frequently gave interviews related to the show before passing away at the age of 84 in 2009, having had to cancel a planned con appearance due to health issues related to a lengthy battle with cancer. Said con would add a posthumous dedication to him in their screening of the newly-recolourized third episode of "Planet of the Daleks".