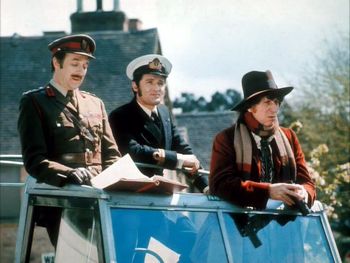 Harry Sullivan and the Brigadier find themselves in the presence of a massive scarf and the fresh face of the humorous Fourth Doctor.
"Still, I must be patient. A new body is like a new house: it takes a little time to settle in!"
— The Fourth Doctor, observing his new body for the first time.
Advertisement:

The one with the debut of the most famous set of teeth and curls in time and space.

Picking up with a flashback to where the previous episode left off, the Third Doctor regenerates into the Fourth. He wakes up and madly babbles quite a bit, worrying Sarah Jane and The Brigadier before he's taken away by the new castmember: Doctor Harry Sullivan. However, a few scenes later, the Doctor has wrangled his way out of the infirmary and ties up Harry in a jumping rope (in a rather funny moment) before leaping off into the TARDIS.

Sarah Jane and the Brigadier return to the Doctor's lab just in time to see the TARDIS start to take off, but manage to stop the Doctor from fleeing into the cosmos (not really). Eventually, the Doctor's random babbling and memory lapses subside long enough for him to remember what's going on — and just long enough for the Brigadier to tell the Doctor our problem of the week. Someone's stealing things from top-secret government and military bases. After the Doctor decides on his new outfit, they head outside. At the scene of the most recent break-in, it takes the Doctor a few minutes (and a look at the list of other items stolen) to deduce that the stolen items could make... a disintegrator gun!

The Brigadier immediately has the final part of the gun secured with as much personnel as UNIT can afford to spare. Meanwhile, Sarah Jane heads over to the local "think tank", the National Institute for Advanced Scientific Research, to investigate. UNIT and the Doctor try to protect the remaining part of the gun, but as the Doctor already suspects, the thing gets stolen from underneath the ground.

Sarah Jane is taken on a tour by the head of the organization, Hilda Winters. But all she finds is some oil in an abandoned lab, supposedly left behind by the former occupant: Doctor Jeremiah Kettlewell. Sarah drives over to visit Kettlewell, only to have him ramble on at her worse than the Doctor just did. Kettlewell manages to get something out about "robot research," so Sarah sneaks back into the abandoned area of the lab, to confront... a giant robot! It lurches towards her, demanding to know why she's there.

She panics and flees, but Winters and her lackey are standing at the doorway. They proclaim this is all a massive joke and everyone's having fun looking at this robot, the Experimental Prototype Robot K1. And Winters proves this is all a great joke by ordering the robot to... kill Sarah Jane! The Robot, unable to kill because it goes against his primary directive (or maybe knowing that companions rarely die), decides to enter the dreaded Blue Screen of Death mode — and Sarah Jane hurries herself out of there. Winters' lackey, Jellicoe, voices concern over that "joke", as the robot's programming has been screwed with. Which is why it killed earlier when it was instructed to do so. Unfortunately, this made the robot's mind unstable and he refused to listen to his adoptive masters.

So, rather than let the robot defragment its hard drive or reflash its firmware or whatever the hell ailing computers did in 1974, Winters and Jellicoe decide to reprogram K1 and... send it off to kill a Cabinet Minister! Meanwhile, the Doctor and UNIT decide to visit Kettlewell, as Sarah Jane's reports of a giant robot that could crush you without a second thought if its operating system doesn't crash aren't proof enough for UNIT. Kettlewell mocks the idea of the K1 Robot still being around, as only he has the ability to make it work... but does eventually admit that if the robot was reprogrammed, it could go utterly insane. But, really, what are the odds of that?

So, everyone goes back off to the Think Tank under various guises. The Doctor as a simple visitor, Harry as a random medical inspector. The Doctor and Winters banter back and forth about the K1 Robot, but Winters claims it's been dismantled while the Doctor figures she has to be lying. Back at UNIT HQ, the Doctor receives a call from Kettlewell about the Robot being at the Institute. He leaves a note on the TARDIS and then runs back to the Think Tank. There, the Doctor finally runs into the K1 Robot, which proclaims him the enemy of Humanity. The Doctor gives it a game struggle (involving marbles, creative use of his scarf, and his own hat) before being knocked down, and the Robot begins to bend down and... well, not actually do anything to the Doctor, as Sarah Jane runs into the room and shouts that the Think Tank is deceiving the poor Robot.

Rather than continue, the K1 Robot flails around helplessly. And then it runs away, showing an ability to tank UNIT bullets like nobody's business. Our TARDIS crew finds Kettlewell tied up in a corner and takes him off to UNIT, where he explains that the robot is made out of living metal. And, in a remarkable coincidence, that he's just developed an anti-formula that can turn that living metal into scrap. (Why the Institute even funds stuff like this is never elaborated on.)

Kettlewell is a member of a new group: the Scientific Reform Society. Sarah Jane investigated them earlier and declared them to be general nutters, but since Kettlewell is a member, it's time to go investigate them in more depth. Sarah Jane runs off with Kettlewell to attend tonight's meeting. The Brigadier and the Doctor realize that the recently-killed Cabinet Member held secret nuclear launch codes for all the nations of the world. note Because, you know, Great Britain was totally a neutral country in the Cold War. The Doctor puts all of these individual pieces together and somehow realises... that the SRS is evil. And Sarah unintentionally screws the pooch further by letting Kettlewell pay a return visit to the SRS. On some level, Kettlewell approves of the SRS, because he's also an environmentalist feeling irate that nobody heeded his advice to stop wrecking the planet. He also faked being captured by K1. And the one time he attends a meeting again, it's enough to convince him to fully sign on with the baddies. Yet, for all his interest in the creation of a better world, he's not quite able to believe that that end justifies a nuclear holocaust as the means, so he's hesitantly straddling the line between good and evil.

UNIT charges in to save the day, only to be rendered useless by the fact that the slow-moving robot can't be hurt by small-arms fire. And that they're now holding Sarah Jane hostage, despite the fact that they have clear shots at everyone else in the organization who poses a threat (well, they have the place surrounded, anyway- no need for unnecessary casualties when you can round up the crooks in cuffs). But the Think Tank is able to escape to their bomb shelter, which happens to be right nearby. Harry relays this information to the Brigadier, but is discovered by Jellicoe and imprisoned alongside Sarah Jane. As UNIT approaches, the K1 Robot comes out again. It's brandishing its massive disintegrator gun and shooting at random tanks, declaring that it will destroy them all!

Armed with the stolen launch codes Winters initiates a countdown, the nations of the world have thirty minutes to meet her demands - if they refuse, she will trigger the missiles. Once he realizes she's not bluffing, Kettlewell has a change of heart and tries to stop the countdown. Jellicoe pulls a gun on him, but he is subdued by Harry and Sarah Jane, who had managed to free themselves in the interim. The three of them flee the bunker and attempt to talk down K1. The K1 Robot apparently wants none of this talking stuff, despite waffling back and forth, and just plain shoots Kettlewell (as a result of helping the SRS, his character lost his sympathetic light with the audience, which gave him immunity to being killed off, and so karma has its way with him). The Robot doesn't take this nicely, however, as it decides to suffer a nervous breakdown from killing its father and pulls a blue screen of death long before it was popular.

Deep in the Bunker, the Doctor is capable of turning off the main threat of nuclear annihilation in mere seconds, thus defeating those nasty science Nazis before any real harm is caused. Except that the K1 robot has revived and has decided to kidnap Sarah Jane. Because Kettlewell decided to program Oedipus Protocols into the robot. And now it's going to wipe out all of humanity, because it's what Kettlewell seemed to really desire, not knowing that the professor renounced those evil ways. So, K1 tries to restart the countdown in the bunker to wipe out humanity — but it doesn't work. As the robot exits the bunker, the Brig shoots the robot with the disintegrator gun, thus killing the robot in seconds and saving the day once and for all.

Haha, no. As it turns out, the robot absorbs the energy from the gun and grows into a giant robot.

The Doctor decides to end this all quickly: he must be more than a little miffed that the Robot has messed up his day-saving and kidnapped Sarah Jane in one fell swoop. In minutes, the Doctor whips up some of Kettlewell's magical anti-metal formula and splashes it all over the Robot. The Robot dissolves horribly and Sarah Jane is saved. Sarah is a little broken up about it, but the Doctor offers her a Jelly Baby and some words of consolation. It works well, and thus the Doctor has now started a new tradition in giving out candied snacks that puts smiles on people's faces. But the Brig wants the Doctor to go through a lot of rigmarole to clear up the robot rampage, and he's in no mood for it. So he's acting childish on a whim and going off in the TARDIS posthaste for some exploration of the cosmos. Sarah prepares to join him, but Harry walks in on them about to leave and finds the idea the Doctor's got an interstellar time-travelling police box preposterous. Wanting to prove him wrong, the Doctor indoctrinates him as a companion. To celebrate, the Doctor and Sarah Jane drag Harry into the TARDIS and fly off into the night.

The Brigadier arrives just in time to see the TARDIS vanish. Immediately figuring out that the Doctor has snubbed him once again, his face goes glum. Eyebrow raised, the chastened Brig says to himself rather defeatedly, "Yes, well, I'll tell them you'll be a little late."