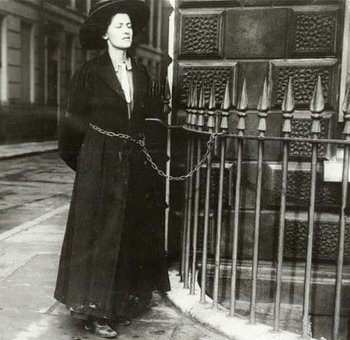 Protesting the destruction of something, usually a tree or building, by chaining yourself to that thing or otherwise physically blocking it off. Political protesters will often instead lock themselves to an important government building. Very much Truth in Television, going back to the suffragettes of the early 20th century.

Doing this heroically marks you as a Badass Pacifist. A less sympathetic character may be a Soapbox Sadie, a New-Age Retro Hippie, or various other flavors of Strawman Political.

If the obstruction is to prevent a person from harm rather than an object, that's Go Through Me.