Series / The Vicar of Dibley 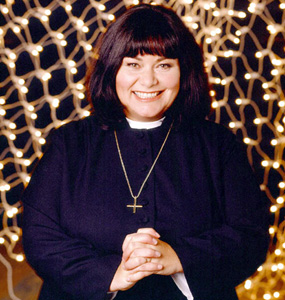 Reverend Geraldine Granger
"I've just been visiting my new parishioners. Frankly I think that they would have been less surprised if the new vicar was Mr. Blobby."note New vicar Geraldine Granger in the first episode.
Advertisement:

A British Sitcom, starring Dawn French as Geraldine Granger. Following the Ordination of Women into the Church of England, Geraldine replaces the old archetypal vicar in the sleepy and quirky country village of Dibley. The village has to get used to the laid back "babe with a bob cut and a magnificent bosom" being their new vicar, while Geraldine herself has to cope with a village full of lunatics and inbreds, as well as the corrupt machinations of councillor David Horton. Hilarity, as they say, ensues.

The show ran from 1994 to 2007. It began with two regular series, with two specials in between. The next series was four season-themed episodes. After three years off the air, the show did two more Christmas specials in 2004 and 05, then a two-part Grand Finale. The cast has also done numerous Comic Relief sketches since the show's beginning (usually running from ten to fifteen minutes), with the latest released in March 2015. After Emma Chambers, who played Alice, passed away in early 2018 it wasn't certain if any further sketches would be made but it returned for the April 2020 Comic Relief and in December 2020 it returned again for three shorts, "The Vicar of Dibley in Lockdown".