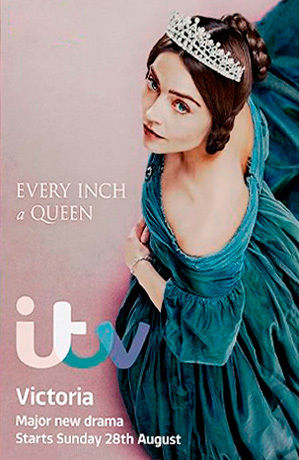 I have to prove my worth every single day, and I cannot do it alone.
Victoria: I know that I am young. And some would say my sex puts me at a disadvantage. But I know my duty, and I assure you, I am ready for the great responsibility that lies before me.
Advertisement:

Produced by ITV and later aired by PBS in the U.S., Victoria is a historical drama following the reign of Queen Victoria, from her ascension to the throne at age 18 and onwards.

In 1837, England's William IV died without a legitimate descendant to inherit, leaving the throne to his intelligent and opinionated but sheltered teenaged niece Alexandrina Victoria (Jenna Coleman). As she ascends the throne, she forges an exceptionally close relationship and alliance with Prime Minister Lord Melbourne, and relies on her childhood governess Baroness Lehzen, while her mother's comptroller Sir John Conroy and her uncle, the Duke of Cumberland, scheme to control the young queen and, by extension, the British Empire. And then there's the matter of Prince Albert of Saxe-Coburg and Gotha, Victoria's cousin and potential suitor. The young queen must contend with personal and political challenges with little room for error on the world's largest stage.

The series debuted on Britain's ITV in 2016 and began airing in the U.S. on PBS in 2017 and was renewed for a second series and a Christmas special. A third series aired in 2019 with a fourth series expected to be commissioned (though with confirmation delayed due to the COVID-19 Pandemic).