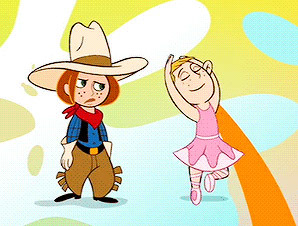 Girls will be boys, and boys will be girls;
It's a mixed-up, muddled-up, shook-up world.
— The Kinks, "Lola"
Advertisement:

Basically, a couple consisting of a very feminine-looking/acting boy and a very masculine-looking/acting girl. Often comes from pairing the Action Girl with the Non-Action Guy and with doses of Crossdresser, Bifauxnen, Ambiguous Gender, Attractive Bent-Gender, Unsettling Gender Reveal, Viewer Gender Confusion, Dude Looks Like a Lady, Even the Guys Want Him and Even the Girls Want Her. Common in Gender Bender and "Freaky Friday" Flip series. Occasionally, House Husbands and their wives will fall under this trope.

Compare to Understanding Boyfriend, Pitbull Dates Puppy, and Violently Protective Girlfriend. Sensitive Guy and Manly Man, Tomboy and Girly Girl, and Masculine–Feminine Gay Couple work on a similar principle, but with two characters of the same gender. The Useless Boyfriend trope can be the result of this, but not always. Most likely are Cultural Rebels. Subtrope of Stereotype Flip.

Important Note: While this is usually a straightforward trope, examples can still get subjective in regards to whether or not the woman is masculine enough or if the man is feminine enough. Keep a few points in mind when editing:

open/close all folders
Advertising
Comic Books
Comic Strips
Films — Animation
Films — Live-Action
Literature
Music
Your football boots,
My football knees,
I hate the shoes they bought for me,
Inside gets boring but when I showed I had an interest in rugby,
They laughed at me.
Myths & Religion
Pro Wrestling
Radio
Roleplay
Theatre
Tabletop Games
Visual Novels
Web Animation
Webcomics
Web Original
Web Videos
Real Life