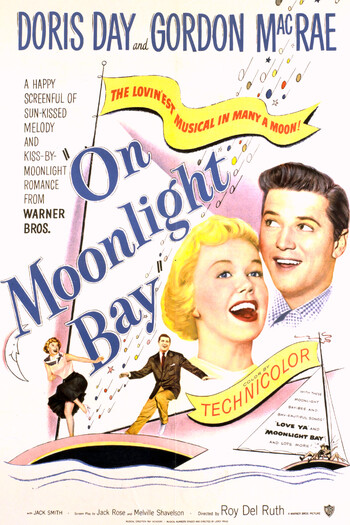 "We were sailin' along
on Moonlight Bay..."
Advertisement:

In 1910s Indiana, the Winfield family — comprised of parents George (Leon Ames) and Alice (Rosemary DeCamp), their children Marjorie (Day) and Wesley (Billy Gray), and their cook Stella (Mary Wickes) — move into a new house a mile and a half across town to be closer to the bank where George works. There, they meet the family across the street, particularly college senior William Sherman (MacRae). The film is told in a series of loosely-connected vignettes, though the driving plot thread is the blossoming romance between Marjorie and Bill.

A sequel, By the Light of the Silvery Moon, was released in 1953. In the sequel, Marjorie and Bill face new challenges, including getting married. Meanwhile, George and Alice Winfield prepare for their wedding anniversary.

This film and its sequel feature examples of: