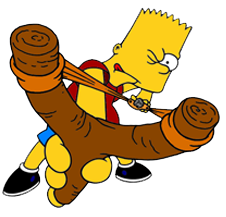 A ten-year-old boy with a slingshot is about to shoot you.
Advertisement:

When you need to weaponize a child in fiction, you give him a slingshot. It is always in the classic Y-shape and preferably made out of a single piece of wood. Kids use them either to cause mischief or as actual weapons; when not in use the slingshot will be carried shoved into the back pocket of trousers or overalls. Sometimes when the child has to inflict serious damage with the weapon in combat, the pellets they launch can be explosive.

Slingshots are weapons, which makes you wonder why all these fictional parents let their kids wander around with them in their back pockets, especially considering kids who use them always display amazing accuracy. Slingshots are also likely to be As Lethal As They Need To Be; sometimes they will merely annoy the person they're fired at, but they will be quite effective when used against enemies.

The Weapon of Choice of the Bratty Half-Pint and other Youngsters, probably because it allows them some means of defense without any expectation of them actually killing someone. Also a frequent starter weapon in Video Games and a Weapon Jr. for younger versions of Archer Archetype.

In Britain, a slingshot is known as a "catty" or "catapult," while in Australia, it's sometimes called a "shanghai."

Also note that a "slingshot" is not the same as a "sling" or a "slungshot,"

which was a 19th century gang weapon consisting of a weight on a string attached to the arm. Laws on the books prohibiting "slingshots" may be talking about this weapon, depending on how old the law is.

Compare Suffer the Slings, which is about slings. Water balloons may be used in conjunction.