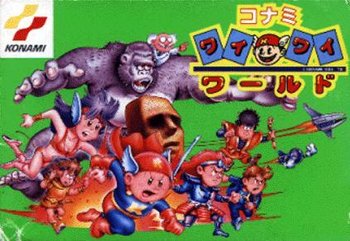 Wai Wai World, or Konami Wai Wai World, is a Massive Multiplayer Crossover of characters from Konami games released for the Famicom in 1988. The game has Konami Man and Konami Lady (the mascots for Konami at the time) travel through six selectable platform levels (each based on a different Konami game) to rescue the star of the game that the level is based on. After this finished, the player has to play a Unexpected Shmup Level then a linear last stage. The characters are:
Advertisement:

A sequel, Wai Wai World 2: SOS!! Parsley Jō, was released for the Famicom in 1991. In this game a new protagonist, Rickle, takes the spotlight, with the ability to change into Goemon, Simon and Fuma, and newcomers Upa from Bio Miracle Bokutte Upa and Bill Rizer from Contra. The gameplay here is much more linear and lacks the Metroidvania aspects of the original game, but there are still a few branches and several Unexpected Gameplay Changes.

Wai Wai World was released for mobile phones in 2006. However, King Kong and Mikey (and their stages) were removed for licensing reasons. They were replaced by Penta from Antarctic Adventure, and the before-mentioned Upa (who got their own stages to replace the missing ones).