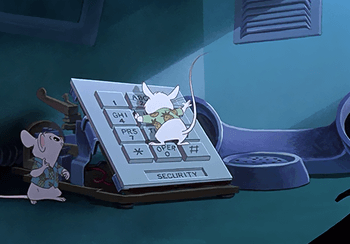 You should see them check their email.
"For behind the wooden wainscots of all the old houses of Gloucester, there are little mouse staircases and secret trap-doors; and the mice run from house to house through those long narrow passages; they can run all over the town without going into the streets."
— The Tailor of Gloucester
Advertisement:

Similar in many ways to Beneath the Earth, the Mouse World exists in secret on the fringes of human society; the difference is scale. This is an entire class of stories built around tiny protagonists operating just out of sight in the human world. These come in a few flavors, but all share some important common elements. In any case, the lives of the little folk draw eerie parallels to the lives of the big-folk.

In an urban setting, the characters most often act like rats, even when they aren't actual Talking Animals in the 3- to 6-inch range. They live in Mouse Holes using adapted or cobbled-together materials made from human trash with the odd toys and models thrown in, usually making it Scavenged Punk.

If they deal with human opponents directly, expect clever trickery, stealth and the odd Colossus Climb or Gulliver Tie-Down. They may become Dinky Drivers to operate human vehicles. In more rural or wilderness settings, they may live in Mushroom Houses. If humans aren't aware of them in the slightest (as in most cases), it's usually because they either have a strong Weirdness Censor, the tiny species is keeping a complex and clever masquerade, they operate a Mobile-Suit Human or two, or they simply regard talking and/or clothed Funny Animals or tiny humanoids as an Unusually Uninteresting Sight. In some cases one lucky human (usually a child) Speaks Fluent Animal and is the only human character in the story aware of the tiny species. In combination with an Incredible Shrinking Man, you can have a Trapped in Another World plot. Other slightly larger animals such as cats and dogs may also play a role in this world, but expect Animal Jingoism to come into play, along with examples of Cats Are Mean.

The trope may have begun with the original Lilliputians, and later Gulliver's time with the Brobdignagian giants, in Gulliver's Travels by Jonathan Swift (although there were a few very small beings in some cultures' version of the Oral Tradition, long before Swift's time). The best-known recent version is probably The Borrowers books and their adaptations to other media.

The Mouse World is almost always a Wainscot Society, more or less literally. ("Wainscot" is wooden panelling on interior walls, and small beings might live behind the wainscot in houses; mice often do in the real world.) However, the Mouse World may not feature a fully-developed society. Hence, this is a Sister Trope and often functionally a Subtrope to that one. Not to be confused with the Disney Theme Parks. If you're looking for little people who don't necessarily live in one of these worlds, head over to Lilliputians.