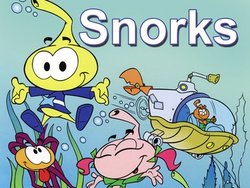 Happy we'll be, Living under the sea, Come along with the Snorks!
Advertisement:

The Snorks was a 1980s cartoon, originally developed by Freddy Monnickendam and produced by Hanna-Barbera. The first two seasons aired on NBC, the last two were syndicated. The show was about the Snorks, who live in a village under the sea and have snorkel-like appendages on their heads instead of noses. The Snorks were forbidden to ever leave their undersea village because those in power didn't want them to be found by humanity. So, Once an Episode, the heroes of the show had to leave the village for the greater good. And they always got away with it, despite the punishment for leaving being steep.

...at least, that was the gist of Season 1. The later seasons focused more on how the Snorks interacted with each other. Things really changed once the show hit syndication; new characters were introduced, and the old ones either had their personality tweaked or were ousted altogether.

It's a little like The Smurfs but underwater — and the characters have their own individual appearances. They do their smurfing in pretty much the same way (All's well that snorks well!).