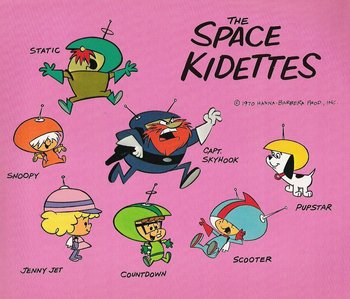 The Space Kidettes is a Hanna-Barbera cartoon that ran for 20 episodes from September 10th, 1966, to February 4th, 1967. Four kids and their dog, Pupstar, live in a clubhouse in space, while constantly being pursued by Captain Skyhook and his sidekick, Static, for their treasure map.

Tropes that appear in The Space Kidettes: