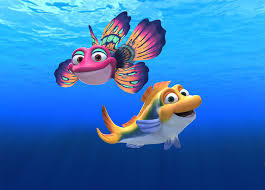 Splash and Bubbles is a CGI children's show produced by The Jim Henson Company, and created by the creator of Johnny and the Sprites, John Tartaglia. It premiered on PBS Kids on November 23, 2016.

The show follows the underwater exploits of a yellowback fusilier named Splash, and his friends Bubbles (a mandarin dragonet), Ripple (a seahorse), and Dunk (a pufferfish). They are the Reeftown Rangers, who vow to explore Reeftown and make new friends. The show teaches about oceanography and undersea life with a dash of social skills.

In-between the episodes, at least during PBS airings, are a live-action segment called Get Your Feet Wet, which features real kids asking ocean-related questions. Sometimes they are followed up by a song.

In October 2019, Tartaglia confirmed the show was cancelled and won't be getting a second season, due to a lack of funding.