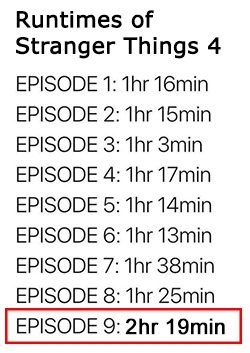 Sometimes, a TV show will have a special episode that lasts longer than usual.

It is especially common for Grand Finales (especially for Long-Runners), and Very Special Episodes to originally be broadcast as these longer episodes. It can also be common (in, say, the USA where programming slots are fairly strict) for both half-hours of an hour-long extended episode to have their own separate plots, so that they can be re-run independently.

When two episodes are aired back-to-back (often at the start of a new season), and are explicit in this, it does not count. Additionally, having a pilot episode be of an exceptional length is common, and examples of such go under Pilot. Is commonly an element of the Stock Sitcom Grand Finale.

Distinct from a Multi-Part Episode in that there's a single episode, not multiple sequential episodes with a single plotline. Syndication may blur the lines between them by cutting one episode into several. Also related to Made-for-TV Movie, if the TV movie is really a glorified special episode for an established TV series.

Compare Inconsistent Episode Lengths, where some episodes are longer than others, but there is no standard length.