Western Animation / School's Out! The Musical 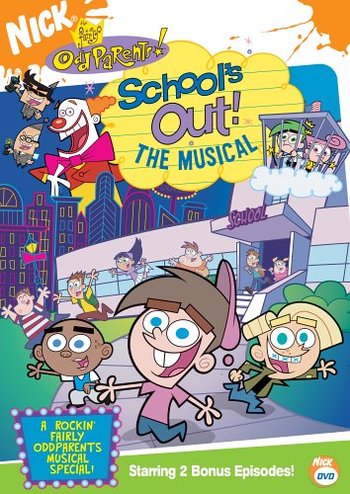 School's Out! The Musical is the third Made-for-TV Movie of The Fairly OddParents.

The movie starts 37 years before the series, when HP and his assistant Sanderson, coming off a defeat from the Fairies, come across a baby clown whose parents had thrown him off a train in an effort to save him (the train was approaching a gap in the track but switched to a stable one at the last minute). Thus HP begins setting up a Long Game, with the infant clown as the centrepiece.

In the present, summer has started and the school's out, to the dread of the adults of Dimmsdale as the kids start running amuck. The Pixies, seizing their chance, work behind the scenes to make the kids' actions even more destructive. In comes a man named Flappy Bob, who offers to take care of the kids in his "Learnatorium": an over-sterilized, over-protective, and educational-laden dull place. When the kids are forced to go there, Timmy comes to the conclusion that "adults ruin everything" and wishes kids were in charge of the world.

Seems like a good enough wish, right? Of course, if you know this show, it naturally leads to unforeseen consequences engineered by HP himself and Timmy has to find a way to set it right.

School's Out! The Musical provides examples of: