A Side Order of Romance 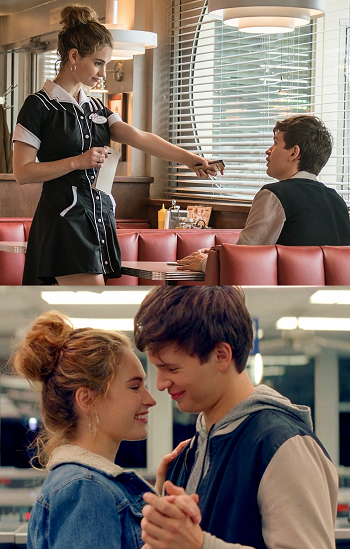 When a Meet Cute is the main course.
"All naive, busty tavern wenches in my realm will be replaced with surly, world-weary waitresses who will provide no unexpected reinforcement and/or romantic subplot for the hero or his sidekick."
— Evil Overlord List, Rule #31
Advertisement:

In works based around The Team, whether a Work Com or a fantasy action show, sometimes writers want to introduce a romance subplot, but for one reason or another need to find a Love Interest outside of the team. Maybe everyone but the protagonist is in a relationship, maybe you have Chromosome Casting and Incompatible Orientation, or maybe the team dynamic just calls for No Hugging, No Kissing. One of the most common ways around this is to have one of the mains fall in love with a waitress or barmaid.

There are several reasons for this. You can introduce a waitress character without too much explanation or backstory, as fictional characters tend to spend a lot of time in bars and restaurants anyway. Often, visiting a restaurant is the hero's time to unwind from their main job, so the waitress interacts with him as an ordinary civilian, not Bob The Action Hero, giving their relationship a unique dynamic. This often leads to a plot twist later, where our hero must suddenly reveal his quest or Secret Identity to the waitress, who is usually unquestioningly supportive. In these cases the waitress often provides the team unexpected reinforcement in the eleventh hour.

Plus, waitresses are paid to be charming and are sometimes even scantily clad. The association of food and love doesn't hurt either.

A Sub-Trope of Boy Meets Girl. Related to Coffee Shop A.U. Fic, where an author puts characters from another work into this scenario. If a character thinks waitresses are categorically attractive, that's Inherently Attractive Profession. Compare/contrast Hospital Hottie - while both are caregivers, a nurse love interest will meet the hero during an After Action Patch Up (if she's not The Medic), giving her a closer relationship to the plot, and those relationships rely heavily on the Florence Nightingale Effect, which is absent here.