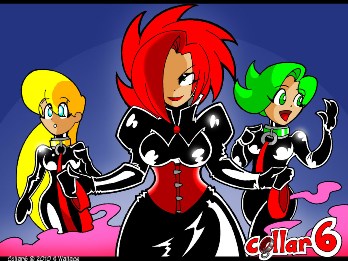 Three girls in latex—what are you waiting for?
Advertisement:

Collar 6 is an Animesque webcomic based around the exploits of a household made up of two (voluntary) slavegirls named Laura and Ginger, their owner Mistress Sixx, and the twin maids Stella and Claire.

In the comic's first major arc (concluded), Sixx locked horns with her rival, Mistress Butterfly, over Trina, a former domme whom Butterfly had collared. Butterfly used Sixx's anger to bait her into a wager — she would stake Trina; Sixx would stake her own freedom and everything she owned. Sixx was victorious, but along with revelations about Laura's past, she soon learned that Butterfly's plans involved far more than just the fate of one woman...

The second major story arc (ongoing) sees Trina happy in her place as Sixx's third personal slave. But the rivalry with Butterfly has not yet been concluded, and Sixx may have acquired the unwanted attention of the mysterious Mistress Black Stone.

The comic's official update-schedule has fluctuated over the years, but it has managed to avoid falling into serious Schedule Slip.

While it originated as a technically worksafe series, later pages (and the page ads) have contained nudity, so it is now definitely Not Safe for Work.

Also contains a side story, Owned

, about a fairly inexperienced male submissive who wakes up to discover he has signed a slave contract with an equally inexperienced domme. Updates far more irregularly than the main comic.

The comic's original website went down due a sustained DDoS attack, forcing the strip to move to its second home on Tumblr, with the original address acting as a redirect.

In August 2018, it was announced the comic would be on an indefinite hiatus due to money issues and artistic burnout.

In December 2018, with Tumblr's ban on NSFW content, the archive was wiped. It is now on Patreon