The character sheet for the webcomic Collar 6. This page shows the various characters and the tropes related to them.

open/close all folders
The Sixx household
Sixx, aka Michelle O'Carroll

Mistress Sixx, the main protagonist, is one of the Global Dominance Association's nine Head Mistresses. She is a hotel tycoon with slaves (i.e. employees) all over the world, but her closest associates live with her in her house and serve as her personal slaves. Wherever she goes, adventure seems to follow.
Laura de Silva nee Xereos

Sixx’s first personal slave. Was initially surprised to find out the extent of the Association, but eventually settled into her new life, insisting that Ginger be made a personal slave alongside her. She temporarily assumed the mantle of Mistress Sixx before giving it back to Michelle following the contest. Because she is so beloved of Sixx, she has occasionally been targeted by the Mistress's enemies.
Ginger

Introduced as the maid in Sixx’s primary household, she was secretly in love with Sixx and initially very hostile and envious towards Laura. This passed when Laura insisted that they share the position of “personal slave.”
Trina Moriyana

A former mistress, now Butterfly's slave. She comes from a well-respected Dominant line and tutored Sixx in order to help her qualify as a Head Mistress. Very little else is known about her.
Stella and Claire

Ginger's cousins and Sixx's new maids. They are brought in after Ginger becomes a personal slave. Stella is the one with blue hair, while Claire's is dark pink.
Linda Knight 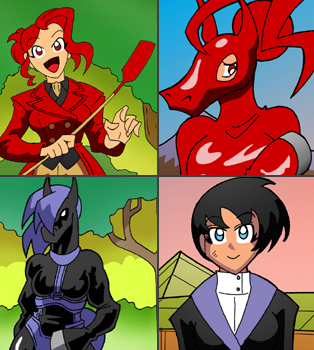 Sardonyx is an equestrian Mistress sent by Mistress Black Stone to retrieve the Golden Pony. Midnight is a dominant Rubber Pony who accompanies her.

A rival Mistress who was somehow able to collar Mistress Trina. Hated by Sixx.
Alice, Anya and Gunther

Butterfly's husband, a mysterious figure who's mentioned early on by Butterfly. He's an insanely powerful dom who uses "black books" and was captured by The Association prior to the story.
The Blackstone Stable
Lady Blackstone
Mysterious head of the Blackstone Stable.
Stable Sister Variscite
Second of Blackstone's minions. Sent to retrieve her wayward ex-mistress and escaped ponies.
Other
Nora O'Carroll

The former Mistress Sixx and Michelle's mother. Is actually an Association Phantom.
Xor-Talatia

A sentient force of evil that has plagued the world since the fall of Atlantis.