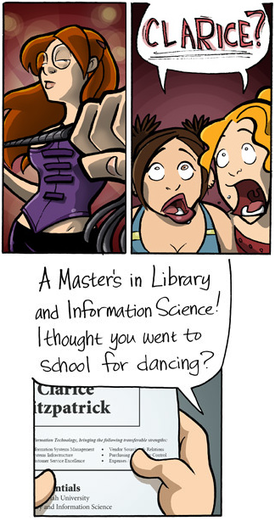 Cracking whips and cracking the books!
"My thoughts ran to Rousseau and Swinburne, both masochists, both geniuses, suffering their mistresses' cruel lashes even as they cried out for perfect enlightenment. Perhaps the body is not our being's basest part after all. Perhaps it is the royal road to knowledge."
— Presley Abbott, The Oxford Girl
Advertisement:

found 20% of practitioners have post-graduate education. It can also be used as juxtaposition, where a submissive, by the books, or quiet straight arrow who usually plays by the rules secretly likes breaking those rules, or being dominant, is bolder or even just more self aware then the audience originally thought. In a similar vein, coming up with creative ways to employ the various paraphernalia involved can be attractive to those with a technical or mechanical bent i.e. The Engineer. Thus, an interest in BDSM can be used to underscore the character's intellectual side — making this trope a mostly "positive stereotype" likely to be used on sympathetic characters.

However, it can also be used as a way to establish a villain as Wicked Cultured. This easily drifts into the Bondage Is Bad trope unless counterexamples are provided or the Safe, Sane, and Consensual trope comes into play.

In some works, Brains And Bondage will take the form of waxing poetic about pain, submission and/or power psychology. In some Anti Intellectual works, it will instead be used as a blunt tool to make intellectuals look bad by invoking prejudice to make them seem "abnormal".

See also Casual Kink. Contrast with Bondage Is Bad, which is the portrayal of bondage and bondage-themed characters in a negative light, and Fetishes Are Weird, which is similar (but less scary).