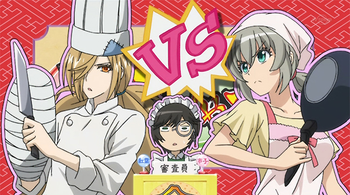 "Our world is a battleground into which only those who can bake truly good bread can enter."
— Kai Suwabara, Yakitate!! Japan, a literal example.
Advertisement:

This time, instead of fists, swords or overpowered fireballs, the combatants can find themselves squaring off through an impromptu contest in some sufficiently quirky task over a perceived slight to one's honor or that of a love interest. While Duels Decide Everything, in Anime anything can be a duel — and in Comedy Series, it usually is. Especially when Kid Samurai and Heir to the Dojo characters with touchy senses of honor are involved. Alternatively, the Alpha Bitch could provoke a less excitable character into such a contest. This is extremely likely in a series involving Martial Arts and Crafts.

Just to be clear, does not have to actually involve cooking, it just has to be that silly.

Essentially, this is the Evasive Fight-Thread Episode made silly with plenty of silly Trash Talk. In shows where the Cooking Duel is Serious Business, expect many a Mundane Made Awesome moment.

When it actually involves cooking, the female combatants of an Unwanted Harem will view it as the ultimate battle for the guy of their dreams. After all "the way to a man's heart is Through His Stomach." Hilarity Ensues as one or more of the girls are often Lethal Chefs, ESPECIALLY if she is the designated girl who will win the guy. But Supreme Chefs can be involved as well.

And of course, as anybody who regularly watches Food Network can tell you, there are also the shows that are literally nothing more than straight-up cooking duels between two people. And of course they originate from Japan. And, oddly enough, many of the above-described subtropes still apply (less the harem tendencies).

This can be hilarious when combined with Chess with Death.

Compare Chef of Iron and Battle of Wits.

Sanji challenges Kotetsu to a cook off using the same ingredients.

Sanji challenges Kotetsu to a cook off using the same ingredients.