Series / Kevin Can F**k Himself 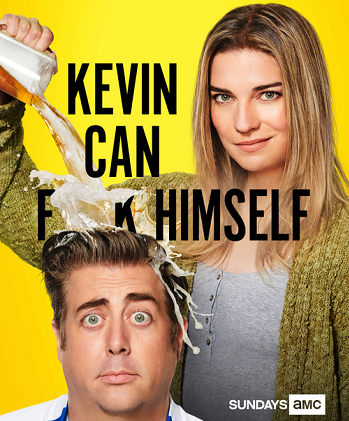 "The world revolves around him. If it doesn't he just blows it to hell. It has to stop."
— Allison
Advertisement:

Kevin Can F**k Himself is a 2021 Metafictional Black Comedy series created by Valerie Armstrong, co-executive produced by Rashida Jones and starring Annie Murphy.

Allison McRoberts (Murphy) and her husband Kevin (Eric Petersen) appear to have the quintessential sitcom marriage. The couple lives in the suburbs of Worcester, Massachusetts, where Kevin acts as the resident Big Fun and gets up to all kinds of wacky antics while hanging out with his friends, leaving Allison to serve the classic role of the Only Sane Woman who has to act as the voice of reason and bring Kevin and his friends down to earth again, much to Kevin's outspoken chagrin.

However, in reality Kevin is actually a Jerkass Manchild who is completely clueless to the destructive and lasting consequences of his many Zany Schemes and whose buffoonishly abusive behavior has increasingly worn down Allison, with the sitcom trappings being simply the result of Kevin's warped and narcissistic perspective. Allison's perspective is... different. Deeply depressed and fed up with constantly having to cater to Kevin's childish whims and irresponsible nature, both of which have wreaked considerable havoc on her social life and the couple's finances, and only ever getting condescension and derision from Kevin and his friends, who call her a nag and a wet blanket whenever she tries to bring just the tiniest degree of sanity and moderation to their immature proceedings, Allison finally decides what she wants: Kevin must die.

The show premiered in June 13, 2021 on AMC+, with episodes airing on AMC proper one week later. Trailer here

On August 28, 2021 , AMC announced the show had been renewed for a second season. It was later announced on 30th November 2021 that the second would also be the final season of the series.

Despite the title being a gigantic middle finger towards it (and shows like it in general), it has nothing to do with the 2016-2018 CBS series Kevin Can Wait.

The trailer introduces Allison and Kevin's marriage with bright, sitcom-esque colors and laugh tracks before switching to a darker framing to emphasize that she is deeply unhappy.

The trailer introduces Allison and Kevin's marriage with bright, sitcom-esque colors and laugh tracks before switching to a darker framing to emphasize that she is deeply unhappy.