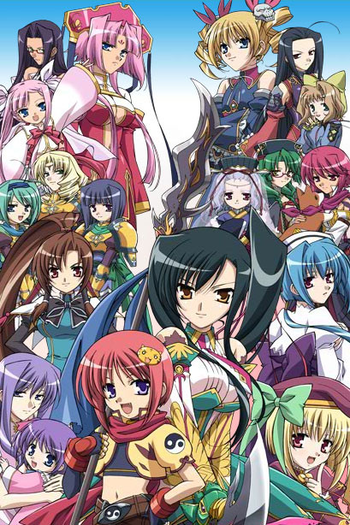 This is the smallest primary cast lineup we're able to find.
Advertisement:

Having lost her family to bandits during a night raid, Kan'u travels across a war-torn China hunting down evil bandits and fighting for justice. During her journey, she comes across others who wish to join her cause. One of them is a little girl named Chouhi, who was also orphaned by bandits.

The Animated Adaptation of the H-Game inspired by Romance of the Three Kingdoms turns Koihime Musou into Yuri Fan bait by removing Kazuto altogether: there are actually very few notable men in any of the episodes. The anime's plot is secondary to gratuitous but surprisingly classy fanservice and keeps very little from the original novel. It basically consists of the expies of the "Five Tiger Generals" (google it already) coming together from across China to band against the anarchical rule of generic bandits.

Depending on region, the broadcast episodes can legally be seen for free at Crunchyroll:

Compare Ikki Tousen. Especially since, as of 2010, Koihime and Ikki Tousen are collaborating on the basis of their similar setups.

Tropes in relation to multiple characters or the franchise: