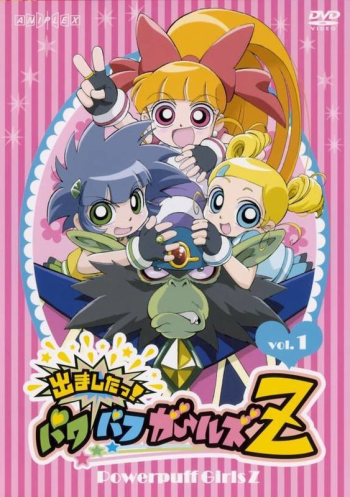 One day, Professor Utonium is called up by the mayor about a nearby iceberg that threatens to cause ecological disaster to the City of New Townsville. While he tries to figure out what to do, his young son Ken decides to take the initiative and use Chemical "Z" to destroy it. While this does work, it also results in white and black variants of the chemical being shot across the city. The white Z-Rays grant superpowers to three unrelated thirteen-year-old girls — the comic book obsessed Momoko Akatsutsumi (yo-yo wielding "Hyper Blossom"), the ditzy yet mature Miyako Goutokuji (bubble wand possessing "Rolling Bubbles"), and the athletic tomboy Kaoru Matsubara (hammer brandishing "Powered Buttercup").note The English dub reverts the "different civilian/superhero names" thing, with them always having the names of Blossom, Bubbles, and Buttercup. Meanwhile, humans and animals hit with the black light have their desires and vices twisted in addition to the power boost, becoming this show's version of the original's Rogues Gallery.

The first half of the series follows a purely episodic format, being a Monster of the Week show wherein half the foes often came in the form of various inanimate objects (such as food or even forms of energy) that were affected by lower doses of black Z-Rays. The second half of the series expanded to introduce a story arc about the impeding resurrection of Him, who was awakened from his slumber by one of the black Z-Rays and whose influence becomes the source of many monsters from that point forward.

The series was made to capitalize on the huge popularity of the original series in the region. As non-native programming is limited to cable, the anime allowed Cartoon Network to give the brand a foothold into Japanese network television. The series aired 52 episodes from July 1, 2006 to June 30, 2007, with there also being a manga adaptation which was published by Ribon and ran concurrently with the anime. Despite the existence of an English dub by The Ocean Group, the show is notably one of the only pieces of Powerpuff media to not see an official North American release, though it has aired in Australia, Latin America and the Philippines.