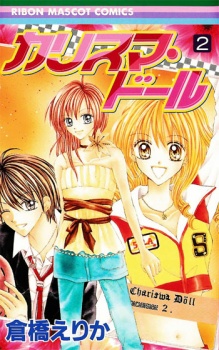 Charisma Doll is a shoujo manga written for Ribon magazine by Erika Kurahashi.

Sara is an ordinary 15-year-old high school student. She's also her famous alter ego Sala, a popular new singer that no one knows their gender. She has a big crush on Hayase Shidou, the lead singer of The Rise, a popular singing group that Sala competes with, who goes to her school. Sara also has a boyfriend, who likes her for the likeness of her physical appearance to Sala. Sara finds out that her boyfriend is cheating on her, and then he dumps her before she can dump him. Seeing her heartbroken, Hayase decides to get a little revenge on Sara's ex-boyfriend. They become very close, but Sala's mother and producer won't allow Sala to jeopardize her career for a boyfriend, and her rival.

Tropes used by the manga: