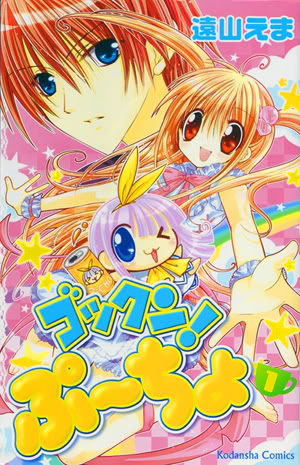 "So remember: whenever love gets you down... a cup of tea might just be what you need!"
Advertisement:

Pixie Pop (Gokkun! Pucho in Japanese) is the first manga series of Ema Toyama and is considered her best work.

After getting rejected by her middle school crush Shinya Amamiya, Mayu Kousaka decides to enter the new year of school forgetting about Amamiya and finding a new love. It's easier said than done, especially with Amamiya being in Mayu's homeroom class and sitting right next to her.

But when Mayu drinks a water drink that changed colors after her tears fell in it, the drink guardian spirit, Pucho, appears. She explains that the drink that Mayu drank had a rainbow drink element, and it was meant for Pucho so that she can turn into an adult and use special magical powers. Pucho tells Mayu that she cannot drink anything other than water, as the properties of other drinks will cause her to transform (ex: drinking cold milk will make her bigger; drinking warm milk will make her smaller).

But is Amamiya still the boy Mayu fell in love with as a child, or just a jerk who rejected her?