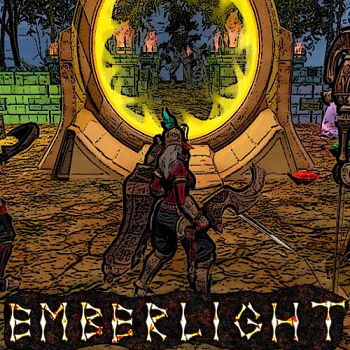 Emberlight is a Roguelike Dungeon Crawler with isometric graphics and grid-style Turn-Based Combat, developed by Quarter Onion Games and released for PC through Steam on August 13th, 2019.
Advertisement:

In it, you play as the Knight of the Ember Order, who goes down with their party in order to protect the realm from the Ember corruption. However, there's a dark twist: the only way to get stronger beyond the normal human capabilities is through absorbing Ember, which also allows the party members to learn the enemies' abilities. However, this accumulation of Ember corrupts them as well, up until they eventually turn on their former brethren and become bosses in their own right. It's up to you to discover if this cycle can ever be broken.