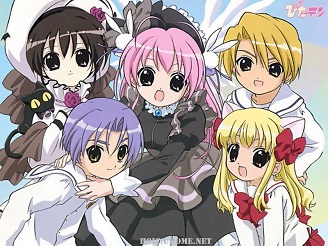 Pita-Ten is a manga created by Koge-Donbo, who's also known for her work on Di Gi Charat. The manga ran in Dengeki Comic Gao! from 1999 to 2003, with an anime adaptation that aired in 2002 for 26 episodes. It was also adapted into a three-volume series of Light Novels, illustrated by Koge-Donbo and written by Yukari Ochiai.

Kotarou Higuchi, a classical Ordinary Grade School Student suffering from Parental Abandonment, suddenly finds himself glomped by his new Verbal Tic -afflicted Ditzy Genki Girl neighbor, a girl named Misha. She assures him that she is an angel in training and she is on Earth to take care of him. She then proceeds to demonstrate it enrolling in his same school (although since she is seemingly older and assigned to the Middle School section, she still escapes to the elementary wing to watch over Kotarou), following and glomping him at the minor chance and often without excuse, for amusement of Kotarou's best friend Takashi Ayanokouji (aka Ten-chan). This is to the great annoyance of Koboshi Uematsu, a girl who has a crush on Kotarou, who immediately sees Misha as a rival.

Complications (and hilarity) ensues when, after Kotarou discovers that Misha is really an angel, a demon apprentice named Shia arrives in town. But, while Misha is just inefficient as an angel, Shia is absolutely awful as a demon, since she is anemic, sweet, considerate, and a perfect House Wife. Then, when Misha and Shia move in together, even with both girls being aware of each other's identity and alignment, it doesn't take long to predict that things are not going to end well.

This series is incredibly sweet and light-hearted, even with the dark past of almost all the cast.

Grab some popcorn, 'cause this is gonna be a wild one!

Grab some popcorn, 'cause this is gonna be a wild one!