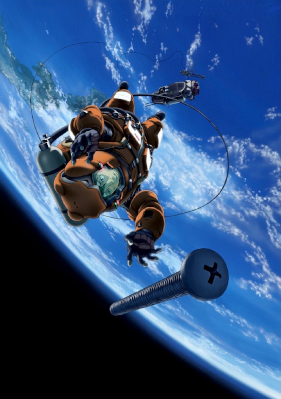 Garbage collecting...IN SPACE! Because in space, bolts screw you.
Advertisement:

Planetes (derived from the Greek word for Planets, which translates to "Wanderers") is a seinen manga series by Makoto Yukimura (who would later create Vinland Saga) that ran in Morning from 1999 to 2004. It provides a realistic and dramatic view of life in space in the near future. The principal cast are the "Debris Section" of the Technora corporation, space trash collectors that are charged with the prevention of deadly orbital collisions with free-floating junk.

By 2075, the depletion of oil reserves has caused mankind to turn to space to solve its increasing demand for energy, through the mining of Helium-3 isotope deposits from the moon. With the increase in traffic, the accumulation of debris in Earth orbit has caused a number of spectacular and deadly accidents, as even a bolt-sized piece of debris at orbital velocity (the minimum speed it needs to travel at to remain in orbit) can take down a spacecraft. This is because orbital velocity for an object in Low-Earth-Orbit (LEO) is about 7.5 km per second or 27000 km/h, which is more than five times the initial speed of a kinetic penetrator tank round.note The impact of a small screwbolt in the opening scene

is much much slower than it should be, just so the audience can see what happens. In real life, if the "camera" were following the bolt, you'd never even see the ship it hits at all. So, our "heroes" (really just blue-collar astronauts and administrators) must collect and salvage this space junk.

Please don't read the examples if you ever plan on watching the show. Just don't.

While escaping from a burning building using a handmade parachute made from bedsheets and using the 1/6th Gravity of the Moon to slow their fall, the Ninjas and Hachimaki still end up breaking several bones in the attempt.

While escaping from a burning building using a handmade parachute made from bedsheets and using the 1/6th Gravity of the Moon to slow their fall, the Ninjas and Hachimaki still end up breaking several bones in the attempt.