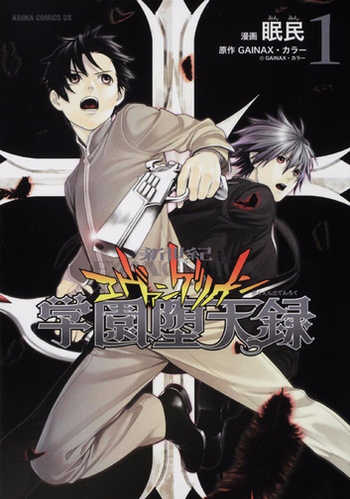 "That night started out no differently—I went to the same vending machines I usually frequented, and bought the same juice as always. But that night was different. That day, I said goodbye...to my ordinary nights."
Advertisement:

Campus Apocalypse (Japanese title: Gakuen Datenroku, which translates to Academic Record of Heaven's Descent) is a 2007-2009 Alternate Continuity-Neon Genesis Evangelion manga by Ming Ming wherein Shinji Ikari is your average middle school student attending NERV Academy, a Catholic school, and living with his guardian, Kaji, whom the former's father sent to take care of him while he worked overseas. One night, while at the vending machines, Shinji sees his crush, Rei Ayanami, with a boy that he doesn't know and then stumbles upon a small orb. The next day, the very boy Shinji saw, Kaworu Nagisa, transfers to his class. Curious about the relationship the two may have, Shinji decides to investigate and finds himself in the middle of a battle between Rei and Kaworu, and a hideous Angel! Turns out that Rei and Kaworu, along with Shinji's other classmate, Asuka, are working for a secret organization bent on preventing the Angels from taking Cores, small orbs (like the one Shinji found) that help the great tree Yggdrasil keep the universes from intermingling and falling into chaos. Now he too must join him, using his EVA, a device that molds into a weapon based on the user's will.

The manga was licensed by Dark Horse and released in late 2010 under its English title.