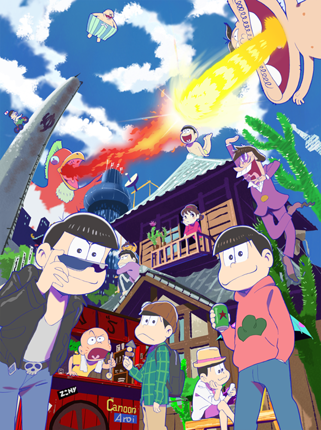 And years later...despite being older than twenty, they couldn't find anything to do. They lazed around all day, and with only their bodies becoming adult, they had become Osomatsu-san.
— Episode 1, "Osomatsu-kun Returns!"
Advertisement:

Osomatsu-san (おそ松さん) is the sequel to Fujio Akatsuka's famous Osomatsu-kun series created for Akatsuka's 80th birthday celebration. The series brings back the Matsuno brothers and their oddball cast of costars and shows what happened to them ten-odd years after the end of the first series. Of course, with a change in audience, the original series' slapstick Showa-era comedy gets traded in for meta humor and topics more relatable to the New Tens crowd to keep up with its contemporaries, but it loses none of the zaniness that the original series was known for.

The series aired as part of the Fall 2015 Anime season. Crunchyroll licensed the anime for streaming under the title Mr. Osomatsu. At first, the series was announced

to be a two cour anime, with the second half beginning in the Winter 2016 Anime season, but this was eventually rebutted

once the series became a surprise success in Japan, and a second season was eventually greenlit

, which had been scheduled for a October 2017 premiere. Viz Media announced the US license to both seasons in August 2017 with an English voice track included in home video releases due for March 2021. A Latin American Spanish dub was announced as well, making the first time anything related to Osomatsu-kun came out in that region, as it only was released in Spanish in Spain exclusively.

2019 saw to a whole new medium to explore— a movie, aptly titled Osomatsu-san: The Movie, which explores the sextuplets going to a high school reunion, but suddenly getting pulled back to their senior year when they were 18 years old.

This series also has a mobile Tower Defense game called Osomatsu-san Hesokuri Wars: Battle of the NEETs, and a host of puzzle games on mobile.

Surprisingly, they've also expanded to the three dimensional realm as well. The series has two stage plays, each coupled with an F6 performance. They also scored a live-action movie for 2022, using idols from Johnny & Associates in the roles of the sextuplets.

The return of the keyboard smashes.

Example of:
Even the Subtitler Is Stumped

The return of the keyboard smashes.