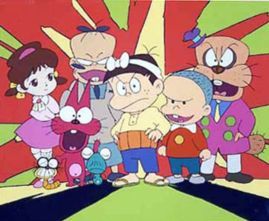 Because some kids need to be tricked into eating vegetables.note Characters: Momoko, X-Goro, Kokoro no Boss, Kemunpasu, Nyarome, Beshi, Ataro, Dekkopachi
Moretsu Ataro (もーれつア太郎 Extraordinary Atarō, sometimes incorrectly translated as Furious Atarō) is a Shounen manga by Fujio Akatsuka that ran in Weekly Shonen Sunday from 1967 to 1970. It revolves around a young orphan named Ataro who lives in the Showa period of Japan. After his dad falls off a tree while attempting to retrieve a balloon for a little girl, Ataro inherits his vegetable/grocery stand. Often joined by his former delinquent buddy Dekkopachi, an alley cat named Nyarome, and even the ghost of his own father, X-goro (pronounced Batsugoro). The occasional antagonist is a soft-hearted mob boss named Kokoro no Boss who runs a gang with his two followers, Kopun A and Kopun B (both of whom are brothers). Boss (implied to be part-Tanuki-part-man) has never had his species explicitly stated, and is referred to by lore as “a mystery”. His rival, Butamatsu, (no relation to Akatsuka's OTHER matsus) a former yakuza member, runs a gang of pigs.
Advertisement:

It's a plot reminiscent of your average Studio Ghibli film, but all possible drama from this set up is thrown out the window once the series gets overthrown by the Funny Animals.

It has had two anime adaptations, both by Toei Animation.