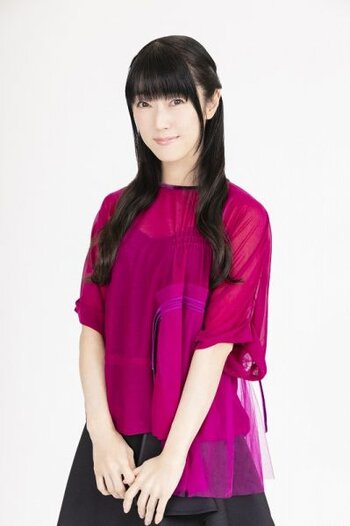 "There, I uploaded my own picture for you. But this doesn't mean a thing, got it?!"
"Urusai, urusai, URUSAI!" ("Shut up, shut up, SHUT UP!")
— Lots of her characters listed below.
Advertisement:

If you think of a Tsundere, think of this person. Yes. Rie Kugimiya (born May 30, 1979 in Osaka, Japan) is a woman very well known for Tsundere roles, more so if the said character is short, tyrannical, and has a flat chest. Fans started noticing her after she did Alphonse Elric, but her role as Shana is what made her popularity skyrocket. Like Norio Wakamoto, Rie is also capable of voicing a lot of character types, including boys, or Yandere. She's also a skilled baton user, so yeah, she can kick your butt... but she'll likely get dere-dere afterwards in apology.

Unfortunately, the fact that producers (particularly JC Staff, the studio primarily responsible for her fame and typecasting in tsundere roles) LOVE pigeonholing her as Shana Clones (her best forte), generates Hype Backlash amongst fans, accusing her to be unable to voice anything outside that. For proof otherwise, see the list below. Her Fan Nickname is Queen of Tsundere and TsundeRie, which may either point on how she's pigeonholed in that role or how famous she is for playing it because she's that good at it. In fact, Shana, Louise, Nagi, and Taiga are collectively known as the Four Tsundere Wonders.note The current candidate for the fifth Tsundere Wonder is Aria.

That said, starting in 2014 she really began branching out heavily into other roles - the most notable was her landing the gig as cute animal companion Vee/Vyrn of Granblue Fantasy, which, thanks to the massive success of that game and the sheer volume of voicework she's recorded for itnote Vyrn participates in virtually every story event and full-voiced Fate Episode, meaning Kugimiya records dozens or even hundreds of Vyrn lines a month, has come to be as emblematic of her as Shana. (Her most glorious moment was perhaps getting to sing what is clearly the most definitive version of Dark Silver Wings

, the Bahamut boss theme.) Her success as Vyrn has resulted in her getting a wider variety of roles in anime and video games as The New '10s have gone on, including roles like Oda Nobunaga and Cleopatra in Fate/Grand Order, who are as far from Shana as you can get.

She is also available in GPS form to guide you

S-stupid tropers! I-It's not like I want you to read my roles or anything, baka:

"Are you done? My turn now. I hope you're fine with that."