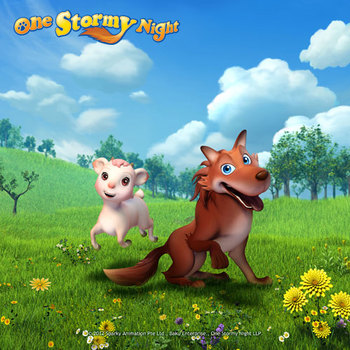 One Stormy Night: Secret Friends (Arashi no Yoru ni: Himitsu no Tomodachi) is a 2012 anime series based on the children's book series One Stormy Night.

Gabu is a wolf who becomes friends with a goat named Mei (or May in the English translation) in a barn during a one stormy night. For the most part of the series, the wolf and the goat live some adventures, alternating between spending time together in secret, and living with their clans.

While the movie tells the whole story, save for some parts, this series is an expansion of the life of Gabu and May.

It began airing on TV Tokyo on April 4, 2012 and ended September 26, 2012. The anime is noteworthy for depicting Mei as a girl, compared to the books in which Mei's gender isn't specified (though the author later said Mei was supposed to be male all along, but let the reader interpret Mei's gender as they want), and the movie in which Mei is depicted as a boy. The series hasn't been released internationally but it has an English dub because it was written in English then dubbed back into Japanese.