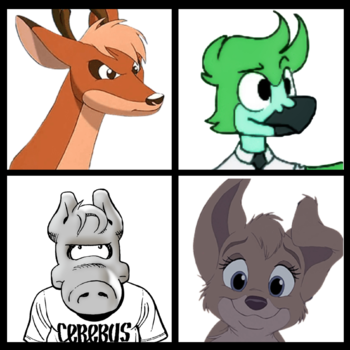 L - R, top to bottom: Arrow, Alan Talonson, Cerebus, and Angel.
Some animal characters have a tuft of fur or feathers on their heads to make them stand out more. This can be used to make the animal look like it has hair, simply to distinguish it against other individuals without giving it an accessory to wear, or to just break up what could be an otherwise plain silhouette.
Advertisement:

The tuft of fur or feathers can take the form of a cowlick, a feather crest, a stylish curl, messy fuzz or set of tufts, a few or a set of spiky tufts, or a shock that sticks out as well as a simple tuft. The tuft can either be small, medium, or large. The tuft is most frequently placed on the top of the head, but it can also be placed on the back of the head. A majority of head tufts on fictional animals point toward the forehead and face, but some can point away from the face and grow more with the general fur or feather growth.

When it comes to Funny Animal and Beast Man characters this is much more common in males to the point of being a Tertiary Sexual Characteristic. Female characters will usually have a Furry Female Mane while males only have a small amount of fluff. With Nearly Normal Animal and Partially Civilized Animal characters the opposite is usually true. Female characters are more likely to have tufts of fur to establish them as females while males are normal and "bald". However, in the case of a Messy Male, Fancy Female pairing, the male animal might have a tuft while the female has smooth fur.

There is a trend in the Furry Fandom to draw long, exaggerated hair tufts that look a bit like scene hair. You'll see this often in fan-art for series like Warrior Cats or Pokémon. Even if they're not exaggerated, tufts of head fur are extremely common on feral fursonas and OCs.

Compare to Non-Mammalian Hair and contrast with Furry Female Mane.