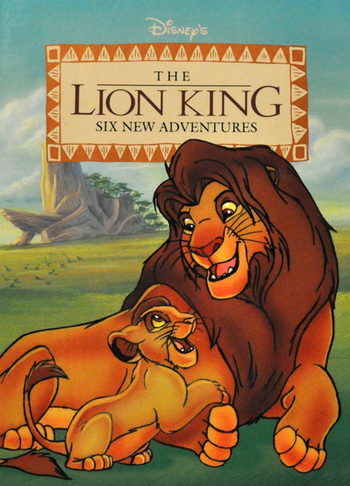 The Lion King: Six New Adventures is a series of six short chapter books based on the Disney film The Lion King. They were released in 1994. The books are: A Tale of Two Brothers, Nala's Dare, Vulture Shock, A Snake in the Grass, Follow the Leader, and How True, Zazu?.

Six New Adventures takes place sometime after the original film. Simba and Nala's cub, Kopa, has grown up quite a bit since the ending. Most of the stories are characters telling Kopa events that happened in the past.

The books follow a different continuity to The Lion King sequels and other extended media such as The Lion Guard, as they contain contradicting events and characters. The creators of The Lion King II: Simba's Pride were unaware of Kopa and ended up creating their own cubs instead, Chaka and Shani. Eventually Chaka was phased out and Shani was renamed to "Kiara". Fans enjoy the Canon Foreigners and Worldbuilding and thus several of the characters are frequently referenced in fanworks. The Lion Guard series gave Simba and Nala a son, but Kion is a completely different character from Kopa.