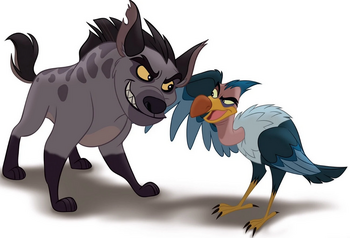 A hyena and a vulture can't be up to any good.
Calvin: Were [Tyrannosaurus rex] fearsome predators or disgusting scavengers?
Hobbes: Which side will you defend?
Calvin: Oh, I believe they were fearsome predators, definitely.
Hobbes: How come?
Calvin: They're SO much cooler that way.
— Calvin and Hobbes
Advertisement:

In fiction (especially xenofiction), a carnivorous animal is very commonly the villain facing off against a bunch of heroic herbivores. But what happens when a carnivore is a hero?

Simple: make the villain a "lesser" carnivore. Or, in other words, a scavenger.

A very specific form of Carnivore Confusion, this trope presents scavengers as ugly, dirty, greedy, and all around unpleasant creatures who would gleefuly feast on equally rotten meals that nobody in their right mind would touch. Usually applied to creatures like hyenas, corvids, jackals, and vultures, probably due to Small Taxonomy Pools. They will often be depicted as Villainous Gluttons and Dirty Cowards, due to their preference for easy meals that are either lying dead on the ground or too weak to fight back, as well as their habit of mooching off of the hard-working predators who, in our eyes, truly "earn" their own sustenance. Oddly enough, they won't always be depicted as actually scavenging, instead conspiring to eat the still-living protagonists, which kind of defeats the purpose of them being called scavengers to begin with.

This trope is most certainly not Truth in Television. Scavengers in real life are a vital part of any ecosystem, as they feed on the dead and decaying bodies that dirty up the environment and spread disease. And indeed, all active predators (and even many herbivores) will scavenge if they have the chance, even though you will never see a lion, wolf or deer scavenge in fiction. After all, why should they waste energy running after their food (or digesting grass) when a perfectly good piece of meat is lying right in front of them? That being said, their close association with death makes the scavengers' bad reputation at least somewhat understandable and in some places, scavenging animals are known to be serious pests (cockroaches and raccoons, for example). This trope has had an adverse effect on many of these animals: For example, vulture populations have crashed by 90 percent due to people purposely poisoning carcasses in attempts to get rid of them.

A Post-Apocalyptic Dog may also end up as this.

Curiously, scavengers are rarely depicted as the Big Bad of a story; more commonly, they're depicted as Mooks or secondary antagonists—you're more likely to see them as Big Bads if no other carnivores are filling the role. This has a level of Truth in Television to it, as scavengers in real-life generally stay out of conflicts between larger, stronger meat-eaters (but are not Mooks in real-life, obviously).

Sister trope to Predators Are Mean, which one would think would result in scavengers being depicted as nicer, since they at least don't need to kill for food. Often related to Super-Persistent Predator and What Measure Is a Non-Cute?. Related to You Dirty Rat!, Creepy Cockroach, Messy Maggots, and (if humanoid carrion-eaters are included) Our Ghouls Are Creepier. Compare Predation Is Natural, which often goes hand-in-hand with this trope: hunting is part of nature, but scavenging is less so.

No relation to Disaster Scavengers, which are the (mostly human) scavengers in the post-apocalyptic worlds.