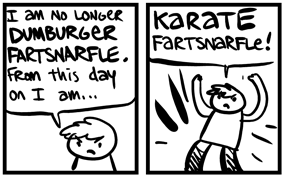 Some names have obvious meanings but often, this is done when it is not the original name for the person, place, or object, but rather, a new one given by someone or assumed.

Renaming oneself can often signify casting aside an old identity, especially if one wishes to part with a particular aspect of oneself. Other times, they may take on the new name in order to reflect a change in their personality or role in life. Renaming someone or something else often is used to claim ownership or to dictate that person or thing's purpose. In the case of this trope, such a renaming is intentional and generally symbolic, and the characters often state their reasons for the renaming.

Changing your name back to the original is also a Meaningful Rename. You learned that you should Be Yourself, or accepted your past and/or heritage, or acknowledged that your grievances were more petty than you thought, or changed your mind about the merits of whatever the rename stood for. Or perhaps you have found your Secret Legacy and re-adopted your original name as a symbol of that.

May feature as a routine part of Rite of Passage as a Rite-of-Passage Name Change.

Don't try to do this if you're a Giver of Lame Names; you'll end up being known as an Atrocious Alias.

May overlap with Artifact Alias. Compare That Person Is Dead, when a character disavows their old name without necessarily accepting a new one. If a name is forcefully taken from its bearer by magic, you're looking at Take Away Their Name. Also compare The Magnificent, which is tacked on to the existing name — whether given or self-ascribed. Egopolis, where a despot renames an entire city after themself, is a subtrope. Please Select New City Name usually falls under this. See also The Maiden Name Debate which involves changing one's name after marriage. A Stage Name or Pen Name may also qualify. See Do Not Call Me "Paul" for when a character disregards their given name for personal reasons. Outgrowing the Childish Name is for when a character no longer uses their childhood diminutive name as a sign of maturity. It can also lead to I Have Many Names if the old names are still valid. Contrast Significant Name Shift for when names don't actually change.

Nobody Likes a Debra

When Bitsy meets Mayor Whitebottom's likability consultant, Ashley, she reveals her previous name was Debra but changed it because, according to her, nobody likes a Debra.

Nobody Likes a Debra

When Bitsy meets Mayor Whitebottom's likability consultant, Ashley, she reveals her previous name was Debra but changed it because, according to her, nobody likes a Debra.