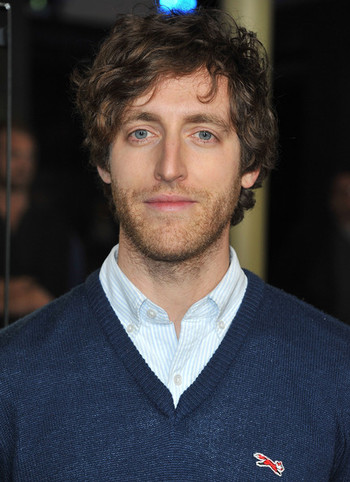 Thomas Steven Middleditch (born March 10th, 1982 in Nelson, British Columbia) is a Canadian actor, comedian, and television writer. He is best known for his role in HBO's Silicon Valley, as Pied Piper CEO Richard Hendricks. His performance in Silicon Valley has nominated him a Primetime Emmy Award for Outstanding Lead Actor in a Comedy Series. He is also known for voicing Harold Hutchins in the DreamWorks Animation film, Captain Underpants: The First Epic Movie (2017) and the titular character Penn Zero in the animated Disney XD series, Penn Zero: Part-Time Hero.

Thomas Middleditch was born and raised in Nelson, British Columbia, Canada with British parents. In eighth grade, he was cast in a play, where he said it "changed everything" for him. In high school, he went from an indoorsy kid who was bullied, to becoming the funny, popular kid. In elementary school, he discovered improv from performing with Theatresports. Before moving to Toronto, he briefly attended the University of Victoria before dropping out. In Toronto, he auditioned and was enrolled for George Brown College, but he never attended classes. He instead made sketches on his own, and then worked at a New Balance store for an income. Then, he relocated to Chicago, where he attended classes The Second City and iO Theater, while also performing regularly at the same time. Until Charna Halpern sponsored him to get his work visa, he had immigration issues. He got an audition for Saturday Night Live while performing on a Second City cruise. Although he did not get cast, the routine he used in this audition landed him a network holding deal and then he moved to New York City.

Middleditch began acting in commercials while living in New York City. A sketch video for Chicken McNuggets he made with Fernando Rosa was purchased by McDonald's and used as a commercial in 2007. He also has appeared as a spokesperson in Verizon commercials in 2017.