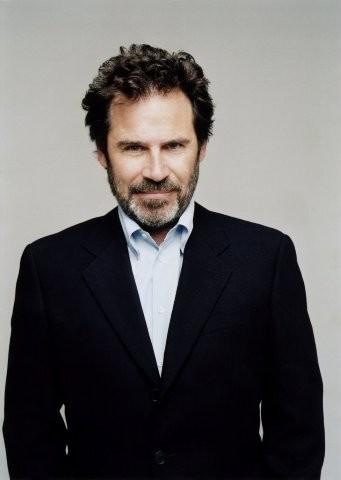 I don't want to go on a rant here, but the U.S. foreign policy makes about as much sense as Beowulf having sex with Robert Fulton at the First Battle of Antietam. I mean, when a neo-conservative defenestrates, it's like Rovslofski filibustered deoxymonohydroxinate. note What the hell does "rant" mean?
—Family Guy
Advertisement:

Dennis Michael Miller (born November 3, 1953) is a comedian, host and commentator. He is known for his very snarky jokes and commentary that includes lots of obscure references and big words.

He got his start as the Weekend Update anchor on Saturday Night Live from 1985note during the show's 11th season, which was so fraught with mediocre writing and acting that NBC nearly had the show cancelled. According to the book, Live from New York: The Uncensored History of Saturday Night Live, Dennis Miller's turn as Weekend Update anchor was considered the only reason to watch the show at the time to 1991, making him the first long-running Weekend Update anchornote with Tina Fey tying his record, Seth Meyers breaking it, and Weekend Update with Colin Jost and Michael Che beating the 112 installments of Weekend Update that Miller racked up between 1985 and 1991 and the first SNL cast member to stay on the show for longer than five years.note Prior to that, most cast members either were dropped after one or two years [whether they quit or were fired] or stayed on until their fourth or fifth year (often leaving to star in feature films or other television shows). Miller opened the door for other long-running cast members like Darrell Hammond, Phil Hartman, Tim Meadows, Kenan Thompson, Fred Armisen, Bill Hader, and fellow Weekend Update anchors Tina Fey and Seth Meyers (the only other Weekend Update anchors to stay on past the fifth-year mark).

Though Miller acknowledged that he wasn't good at acting in sketches and felt at home as a Weekend Update anchor (as it was an opportunity for him to do his stand-up), there were rare times when he was in sketches. His recurring characters were Koko, a forest sprite from the short-lived recurring sketch "Miss Connie's Fable Nook" and Steve, a sarcastic observational stand-up comic (seen on a season 11 sketch on the episode hosted by Jay Leno and a season 13 sketch on the episode hosted by Tom Hanks). His celebrity impressions include Nathaniel Crosby (Bing Crosby's son), Senator Gary Hart, and George Harrison from The Beatles.

After his stint on SNL, Miller hosted a short-lived late night talk show The Dennis Miller Show. After the show's cancellation but before it went off-air, Miller began indulging in long-winded and humorous rants about social and political issues. The rants caused such a stir that he parlayed them into a successful HBO talk show Dennis Miller Live, which combined a celebrity interview and a Weekend Update-like "news" segment with a humorous rant from Miller about a specific topic each week. The show ran from 1994-2002. During this time, he made a famous but abortive attempt at color commentating on Monday Night Football from 2000 to 2001, where his trademark obscure references were poorly received by football fans.

While Miller's politics have never been confined strictly to one side of the political spectrum, his commentary began to shift noticeably to the right after the attacks of September 11, causing an upheaval in his fan base. He is currently a regular contributor on the Fox News channel. Since 2007 he's also hosted his own radio show called The Dennis Miller Show.

Tropes associated with Dennis Miller include: