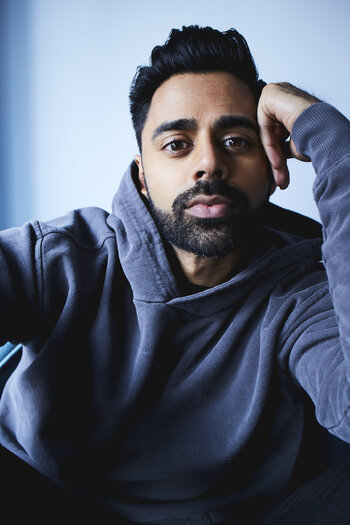 His big break occurred in 2014 when he became the last official correspondent hired by Jon Stewart for The Daily Show with Jon Stewart before Stewart's retirement a year later, and Hasan has since gone on to become yet another relatively unknown comedian whom The Daily Show has springboarded to national and international fame.

He continued as a correspondent after Stewart's retirement on The Daily Show with Trevor Noah for a few years. Then, after Donald Trump was elected President of the United States, he followed in the footsteps of fellow Daily Show alumni Stephen Colbert and Larry Wilmore by hosting the 2017 White House Correspondents Dinner.

Trump, who had developed an adversarial relationship with the WH press corps, had already proclaimed that he would not attend the dinner. Other, better known, comedians reportedly turned down the gig, and Samantha Bee even hosted an alternative "Correspondents Dinner" on the same night. Hasan apparently agreed to "not go after the administration" prior to the event, but when he got there, he went full-throttle

Not long after that, Netflix came knocking, and his stand-up comedy special Homecoming King

debuted on the streaming service in May 2017 to critical acclaim, even winning a Peabody Award. Patriot Act with Hasan Minhaj, Hasan's own talk show, premiered soon after in October 2018, running for six seasons before being cancelled in August 2020.

He's also an occasional actor, appearing in The Spy Who Dumped Me and The Morning Show among other works.

Tropes for Hasan Minhaj and Homecoming King include: