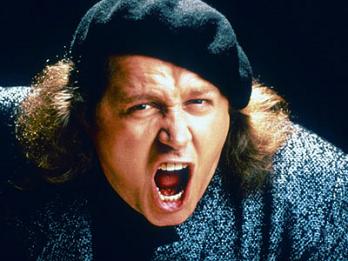 A Preacher's Kid who dabbled in the family business himself as a young man, Kinison brought the fire-and-brimstone speaking style to the American comedy stage, and combined it with Refuge in Audacity turned Up to Eleven.

Kinison's memorable bits included "gay necrophilia"; "lick the alphabet"; "Jesus on the cross" (which included pounding the microphone on the floor to simulate the nails being hammered); "execute Pee Wee Herman"; "Russians are space pussies"; "the Kurds are the most fucked people on earth"; "I'm not afraid of Hell, I was married for two fucking years"; "shoot the homeless"; "emotional tampon" (about being 'just friends' with a woman); "move the Ethiopians to where the food is", and countless attacks on homosexuality.

His most famous media appearance was his portrayal of a whacked-out history professor in Rodney Dangerfield's Back to School. He also recorded a novelty version of The Troggs' pop song "Wild Thing". The music video was a huge hit on MTV (and featured Jessica Hahn, the church secretary in the Jim Bakker scandal, about whom Kinison said "if you're going to lose a kingdom for some pussy, this is the girl"). He also starred in Charlie Hoover, a Herman's Head-like sitcom, which ended after seven episodes because of Kinison's death.

"THESE TROPES ARE LOUDER THAN HELL!":