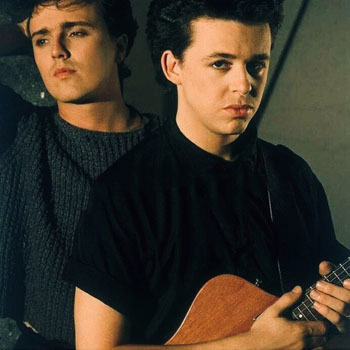 From the Songs from the Big Chair era. Left, Curt Smith; Right, Roland Orzabal.
Shout, shout, let it all out,
These are the things I can do without,
Come on,
I'm talking to you, Come on.
— "Shout"
Advertisement:

Tears for Fears is a British duo consisting of the core members Roland Orzabal and Curt Smith, although plenty of other musicians have been involved in the project throughout the years, many as named members of the band. Formed in 1981 in Bath, England and named for a primal therapy technique, the band — like a lot of 1980s pop acts — haven't had much success since the 1990s; in fact, Smith left the group in 1991, making it essentially Orzabal's solo project (although, as explained below under I Am the Band, perhaps not as much as is popularly assumed). Smith rejoined in 2001 (contrary to certain reports in the media, the renewed attention to their music due to "Head over Heels" and a cover of "Mad World" being used in Donnie Darko was not the cause of this; they had already been in contact a year before this point and decided to be a duo again) and Tears for Fears put out a new album in 2004.

This band's three most famous songs come from their 1985 album Songs from the Big Chair. At least, these are the three songs that you hear on the radio all the time and are featured in "best of the '80s" compilation albums in the 21st century:

Of course, many fans over at their Last.FM page

would have you believe otherwise, and, to be fair, those three are far from the band's only songs to get radio airplay; their other well-known hits include "Mad World" (which has probably become as well known as the three tracks above), "Pale Shelter", "Change", "Sowing the Seeds of Love", "Woman in Chains", "Advice for the Young at Heart", "Break It Down Again", and "Closest Thing to Heaven".

Besides Songs from the Big Chair, Orzabal and Smith did release three other albums. First there was The Hurting in 1983, which sounds more like an angst-ridden Depeche Mode album; this is where the single "Mad World" came from, which later got a more popular cover version by Gary Jules that was used on the Donnie Darko soundtrack. Second was the aforementioned Songs from the Big Chair. The Seeds of Love came about in 1989, and was a lot more experimental, psychedelic, and rockier than the previous albums, although it did spawn a couple of hits ("Sowing the Seeds of Love" and "Woman in Chains"). After their breakup, Roland Orzabal would release two essentially solo albums under the band's name (with collaborators Alan Griffiths and Tim Palmer co-producing and providing additional instrumentation, alongside several other musicians on Raoul and the Kings of Spain; Griffiths also co-wrote most of the songs on these albums) before Smith rejoined the group. The duo released the reunion album Everybody Loves a Happy Ending, which picked up where Seeds left off.

"I Love You But I'm Lost", a non-album single, was released on October 12, 2017, which was then followed by a new best-of compilation on November 10, 2017 called Rule the World, which featured sixteen tracks, including two new songs, which are the aforementioned single, and "Stay". Touring in support of the album in 2017 was interrupted by the death of Roland's wife, Caroline, and he took 2018 off to recover emotionally before returning to the road in 2019.

The Title Track for The Tipping Point eventually saw release as a single on October 7, 2021, with the album releasing on February 25, 2022.

Do not confuse with the trope Tears of Fear.