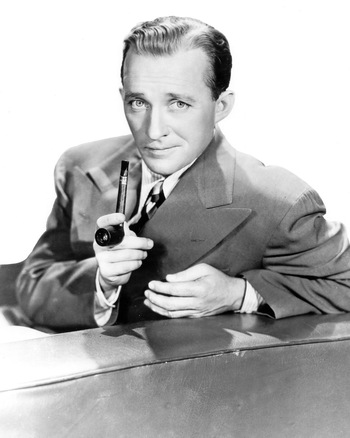 Der Bingle.note Who's this douchebag?
"Everyone knows I'm just a big, good-natured slob."
— Bing Crosby, on himself.
Advertisement:

Harry Lillis "Bing" Crosby Jr. (May 3, 1903 – October 14, 1977) was an American singer and actor whose trademark warm bass-baritone voice made him the best-selling recording artist of the 20th century, having sold over one billion records, tapes, compact discs, and digital downloads the world over. Suffice it to say, that means very few people agreed with his self-assessment of his singing skills.

Crosby started his career in the late 1920s as one of The Rhythm Boys, a vocal trio that accompanied bandleader Paul Whiteman's orchestra. He broke out as a solo singer in the early 1930s, recording several hits for the Brunswick label before starting a long association with Decca Records in 1934. In 1942 he recorded what would become perhaps his most famous legacy: the Irving Berlin song "White Christmas", which stayed at #1 on the charts for over 11 weeks when it was first released, and has remained a perennial Christmas favorite in the United States ever since. In fact, Crosby recorded a great many Christmas Songs over the years, which is primarily how the younger generation is familiar with him. His album Merry Christmas (1945), a Cover Album full of Christmas-themed songs, has sold over 15 million copies worldwide and is the second-best-selling Christmas album of all time, behind Elvis Presley's Elvis' Christmas Album (1957). Other than "White Christmas," Crosby's best-known holiday songs are probably "Do You Hear What I Hear?", released in 1963, and "Peace on Earth/The Little Drummer Boy," an unlikely duet with British rock star David Bowie recorded for a posthumously-aired television special in 1977; the latter tune was also released as a single in 1982, whereupon it became a huge international hit.

Crosby appeared in almost 80 different films over six decades; in the 1940s, he was surpassed as a box-office draw only by Clark Gable and John Wayne. His most famous films include the Road to ... series (in which he teamed with Bob Hope), Going My Way (which earned him the Academy Award for Best Actor), and of course, White Christmas.

Crosby pioneered pre-recorded radio shows, and was an astute businessman. His investment in the Ampex Corporation spurred the development of videotape and he also invested in a little company called Minute Maid. At one time he was part owner of baseball's Pittsburgh Pirates.

Not to be confused with Bob Crosby

, his youngest brother and a talented singer in his own right. No relation to Cathy Lee Crosby, or David Crosby. Denise Crosby is his granddaughter, however.

Tropes invoked by his works:

"He was an average guy who could carry a tune."
— Crosby's epitaph, written by himself.