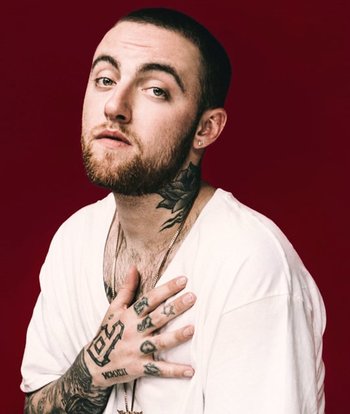 Miller was proficient in music from an early age, picking up piano at the age of 6, starting his rap career at 14, deciding to take music seriously at age 15, and eventually teaching himself to play guitar, drums, and bass alongside the aforementioned piano.

In 2010, he signed a record deal with indie label Rostrum Records after putting out several mixtapes. He released his debut album Blue Slide Park in 2011; it went on to top the U.S. Billboard 200 chart, making it the first independently distributed debut album to top the chart in 16 years. He was also featured on that year's XXL Freshman List.

Although his initial style of music was regularly pigeonholed as "frat rap", with its routine light-hearted subject matter of partying, sex, drugs and having fun, he would grow into a more individual voice over the years as his lyrics tackled more mature and introspective themes, and his production grew more varied and complex, taking influence from genres like jazz, soul and R&B.

On September 7, 2018, Miller died of an accidental drug overdose. He was 26 years old, and had been outspoken on struggling with substance abuse and depression for years, both through public statements and his music. Two months later, it was announced that the overdose was due to a mix of cocaine, fentanyl and alcohol. A year after his death, an investigation opened that led to the arrests of several men who allegedly conspired to sell Miller oxycodone pills laced with fentanyl. The men were later indicted on related charges.

Miller is survived by his mother, father and brother, and the Mac Miller Fund (which supports youth arts, community-building programs, and helps young musicians dealing with substance abuse) was created in his memory. His estate has approved a small number of posthumous releases, most notably Circles, the follow-up to his album Swimming that he was working on prior to his death. Producer Jon Brion, who had worked with Miller on Swimming, finished the album independently.

Reading tropes with the sound off: