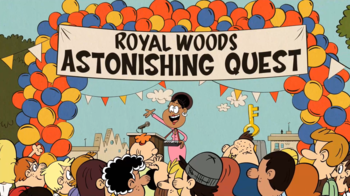 It's that time of the year again. The whole town is assembled at the central park, ready for that one traditional competition the town is well-known for. The host (usually the mayor) will be there to explain the rules, introduce the winning prize and start the event.

Everyone in town will either participate or join the audience, depending on how athletic they are. The contest will always start with a fireworks shot, followed by a crowd shot and depending on how much time there is still left for this episode, a couple of shots of minor contestants before moving on to the main characters wishing each other good luck.

Expect the Competition Freaks to be wearing sports uniforms during the entire episode. The prankster, the bad guy and the bungling inventor will not miss this opportunity to somehow rig the game.

Either the main character wins, or a muggle/nobody will win the game when the amount of cheating reaches ridiculous heights.