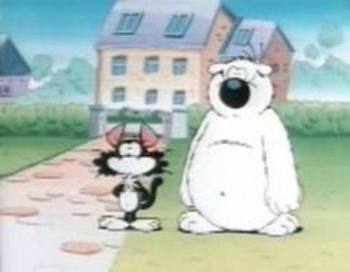 Wowser (original Japanese name: Don-Don-Dommel to Ron) was a Japanese anime series based on the Belgian comic book Cubitus, directed by Hiroshi Sasagawa (Speed Racer) and aired from 1988 to 1989 on TV Tokyonote It aired on Fuji TV or NTV affiliates in some cities. The series was distributed by Saban Entertainment in the US and aired on The Family Channel in 1989.

The series followed the adventures of the titular character, Wowser, a large anthropomorphic white dog with an enormous appetite who lives with his owner, Professor Dingy, an eccentric inventor. Other characters of the series include Ratso Catso (Blacky), a black and white cat who always causes trouble for Wowser, Linda Lovely (Cherry) and her younger brother Bob, and Beatrice, a woman who is always rude and condescending to Wowser.