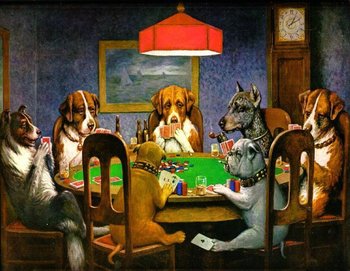 A Friend in Need, 1903
Advertisement:

Dogs Playing Poker refers collectively to a series of oil paintings created by Cassius Marcellus Coolidge. All eighteen paintings in the overall series feature anthropomorphized dogs, but the eleven in which dogs are seated around a card table have become well known in the United States as examples of kitsch art in home decoration.

To see the eighteen paintings, look at the Image Links page.