Canines Gambling in a Card Game 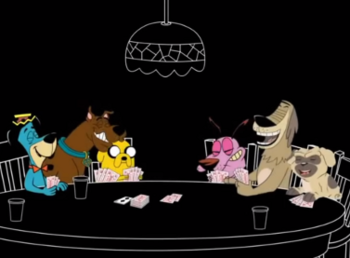 With these dogs playing, the game is bound to get a bit ruff.Left to right Huckleberry Hound, Scooby-Doo, Jake, Courage, Dukey, and Monroe.
"Ah, you see, the poor dumb beasts have no thumbs, so I ask you... how are they holding their cards? ... It should be impossible, and yet somehow they go on... playing the game. In the end, Razputin, aren't we all just dogs playing poker?"
— Edgar Teglee, Psychonauts
Advertisement:

This is a Stock Parody of Dogs Playing Poker.

To those not in the know, Dogs Playing Poker is not a painting, but rather the name of a collection of oil paintings by Cassius Marcellus Coolidge. Eighteen in fact, each set in a poker room or a courtroom or some other place with dogs in varying levels of civility gathered together playing cards or betting on horse races. It's Exactly What It Says on the Tin.

While not all of the paintings from the Dogs Playing Poker portfolio have the dogs actually playing poker, the idea has long since stuck in the public consciousness: dogs put into a set with cards and ash-trays and emptied glasses of scotch as if the dogs were people, and it's funny. Hell, they aren't always dogs. They could be cats, mice, lizards, bug-eyed aliens, and even full-grown people in cartoonish dog-suits.

A 20th anniversary bumper featuring some of Cartoon Network's dogs is interrupted by Gumball Watterson.

A 20th anniversary bumper featuring some of Cartoon Network's dogs is interrupted by Gumball Watterson.