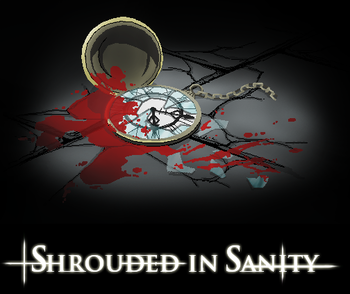 Skautfold is the name given to a series of games created by Steve Gal. They are done in different genres, yet all are set in the same universe, where 19th century Britain has put down Washington's rebellion for good and is instead known as the Angelic Empire of Brittania, whose peace is now upset by the emergence of Lovecraftian horrors...

Shrouded in Sanity is the first instalment, released in 2016 as an Isometric Hack and Slash game. It was later separated into the proper Skautfold version, and the Freebirth one. As its title suggests, the latter is free, but lacks some bonus features of Skautfold, though the overall story is the same in both. It begins in 1897, when the unnatural fog had enveloped Berelai Manor. The player character, Eleanore, is contacted to discover and eliminate its source - a task made more difficult by the former inhabitants of the manor having clearly gone violently insane.

Usurper is a 2017 Metroidvania, set a year after the first game. There, an otherwordly Citadel whose presence was only hinted at in Shrouded in Sanity had finally revealed itself, and immediately began to flood London with eldritch abominations. Waltham, the mysterious benefactor of Eleanore in the first game, is nearly killed attempting to seize the Citadel for himself, and is forced to merge with the nearly-dead Saragat, the Fourth Knight, to rebuild their strength and save London from the Citadel.

Into the Fray entered Steam Early Access in 2018. There, on the Isle of Portland, has seen a rebellion against the now-Empress Eleanore occur, led by the Sons of Washington group. Lillian, the daughter of King Guilford from the first game, has also reappeared, and in a complete coincidence, there's again the spreading fog and the monsters lurking in it. You now play as Yamabe no Akahito, (Hito the Third Knight from Shrouded in Sanity) who is tasked with liberating the isle and apprehending the princess. Since he is an entirely gun-wielding character, this is now done in an isometric shooter style.

Moonless Knight entered Early Access in 2019. This time players assume the role of Gray, the Second Knight, as he travels to Japan to seek the aid of the Dawn Empire.

Tropes present in the entire series:

Shrouded in Sanity contains examples of the following tropes:

Tropes present in Into The Fray:

Alternative Title(s): Shrouded In Sanity, Usurper, Into The Fray