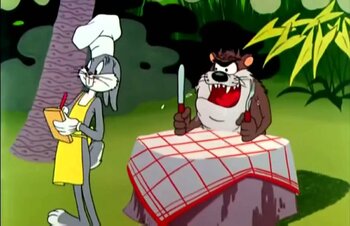 Civilized Animals exhibit some form of civilized manner, but otherwise occupy their species's natural role in the ecosystem and (especially) the food chain. They generally display half the mannerisms of a civilized human character and half the mannerisms of an animal character. They may wear clothes (often being accessory wearing, half dressed or even barefoot, but otherwise fully-dressed), or may live in houses, and are frequently depicted as walking on two legs; but their anthropomorphism stops abruptly at this point, as their everyday concerns are for ordinary activities such as acquiring food and avoiding predation by larger animals. A Civilized Animal can be a pet — a child could just as well play with the pet throwing stick at them or pulling out a game console and playing together.

Civilized Animals are typical of children's stories, especially that of British literature.

A related trope is Mouse World.

Civilized Animals differ from their neighbors on the Sliding Scale of Anthropomorphism as follows:

This is not to be confused with Beast Man, which is for a species that for some reason bears a resemblance to an Earth animal, despite not being related.

Perry is a secret agent assigned to foil Doofenshmirtz's plans. He is also a platypus.

Perry is a secret agent assigned to foil Doofenshmirtz's plans. He is also a platypus.